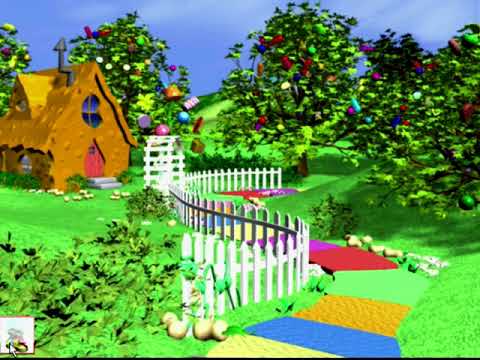 Another board game adaptation! And once again, just like with Chutes and Ladders, I got this game during its run as a General Mills cereal box prize. This is an alright adaptation, though very much a by-the-numbers one. The only real addition over the board game here is the inclusion of minigames based on locations found in the original game.

And, since the question will inevitably rise again — no, I did not play this with three other players. Again, this game entirely depends on the luck of an RNG with no real player input involved. I felt it would be most interesting if I had the maximum amount of players around and would also bring about the highest likelihood that I would be able to show every board travel scene. And it all worked out indeed — the only thing I missed out on was traveling the rainbow path. I even got all of the wild cards (which is what I call any of the pink cards with an icon that take you to a specific space) too which is neat. Speaking of, good heavens I forgot how much those cards can screw you over.

Through the latter half of the board game, especially after the first player reached the end, I turned off movies and just started rushing everyone across the board. It was late at night and I was sick of playing at that point, plus I was getting sick of watching everything slowly crawl by, and just wanted to be done. I then went back and showed off all the minigames. None of them are very intricate but you gotta be complete, right?

Hope you enjoy this walkthrough. I don’t have much else to say.