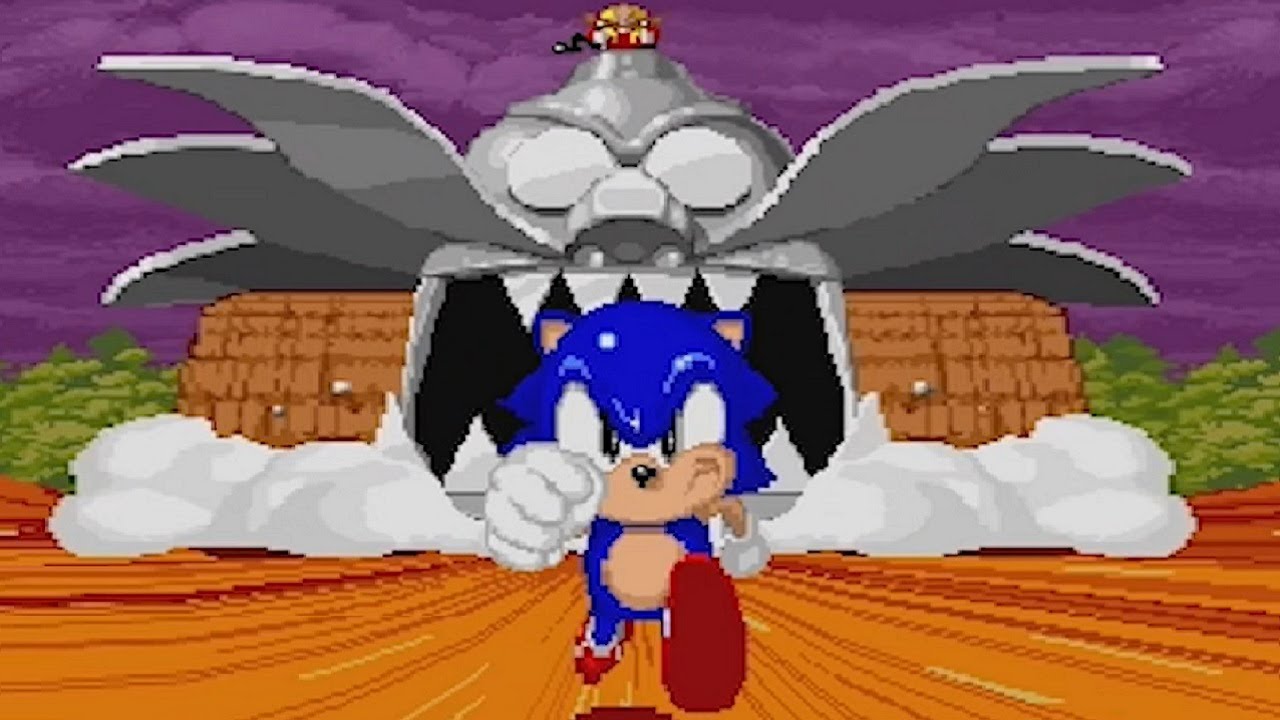 Played through with Sonic on the machine’s default difficulty setting. Since the game was only ever released in Japan, I’ve translated and subtitled all of the Japanese text.

Sonic has a fair few oddities in his line-up, and this certainly qualifies as one of them. Released on Sega’s System 32 arcade hardware in the period between Sonic 2 and 3 on the Genesis, SegaSonic the Hedgehog is an isometric platformer (think Sonic 3D Blast), but with a big, very literal spin on the formula – the entire game is controlled using a trackball instead of a traditional digital joystick. The analog control scheme allows Sonic to change direction smoothly in 3D space, and it gives you granular control over the speed he runs at, making the game feel like an action-oriented take on Marble Madness.

It feels very different from what we’ve all become accustomed to in the day and age of dual analog sticks on modern controllers, and it is the control scheme that has prevented this game from ever seeing a proper console port. Despite both setups being analog, the SegaSonic the Hedgehog is virtually unplayable without a trackball. Sure, you can try to approximate things with a mouse or an analog gamepad, but it’s not terribly playable that way. I played this using a trackball mouse – it’s not as ideal as a dedicated arcade control panel with a huge ball mounted in the center, but in Mame (after *a lot* of tweaking the sensitivity settings!) it provides a fairly close, and fairly playable, approximation of the original control scheme.

SegaSonic the Hedgehog takes place over seven semi-autoscrolling stages across Eggman Island. It supports up to three players simultaneously, and it introduces the rarely seen characters of Mighty the Armadillo (who we saw again in the 32X exclusive Knuckles Chaotix) and Ray the Flying Squirrel (who later showed up in a cameo appearance in Sonic Generations).

The game works like this: Eggman screams some sort of taunt at our heroes, and you take control just as they begin desperately trying to flee from mortal peril – a wall of lava, giant tornadoes, rolling gears – you know, the usual.

The road to escape is littered with all sorts of hazards that have to be avoided as you collect rings and leap bottomless pits. The whole experience focuses on speed, and despite the sometimes awkward touchiness of the controls, the trackball does an awesome job at making you feel like your tearing things up. Unlike the Genesis platformers, though, SegaSonic is *brutally* difficult. The short view distance afforded by the viewpoint and the need for precision movement at high speeds makes for a game that takes a ton of practice to see through to the end. It’s a great deal of fun, but it doesn’t hold back. It was designed to be a quarter muncher, after all.

The graphics look awesome, especially for a game from 1993. There is a lot of sprite-scaling going on, and the characters themselves animate really smoothly. There are even a few impressive bits of pretendered CGI going on to fancy it up – just check out that final stretch as you scale Eggman’s tower! The sound isn’t quite as good as Sonic’s usual, though. The music isn’t terribly memorable and is often buried beneath by the constant thumps and explosions, and you’ll be tired of Sonic’s irritating “Waaaaaah!” scream before you even finish the first stage. Still, it all makes for an appropriately bombastic presentation for an arcade game.

If you love Sonic, I’d absolutely suggest checking it out. Just do yourself a favor and get a trackball – it’s not worth the effort without one.

I also did a translated video of the SegaSonic Cosmo Fighter arcade game if you are interested. You can find that here:
_____________
No cheats were used during the recording of this video.

NintendoComplete ( punches you in the face with in-depth reviews, screenshot archives, and music from classic 8-bit NES games!